1) This is a press release from SARS chief, Tim Moyane as reported by Business Day 23 August. 2016

The lower tax returns reflect a sluggish economy, which is going to make meeting the annual tax target of more than R1-trillion a challenge for the tax authority.

A total of R256.9bn was collected, with VAT coming in 5.5% or R3.3bn lower than estimates, due to rising interest rates, tighter credit conditions, high unemployment and the depreciation of the rand. VAT refunds were 5.6% or R2.6bn higher due to higher-than-expected claims from finance, manufacturing, wholesale and retail trade sectors. 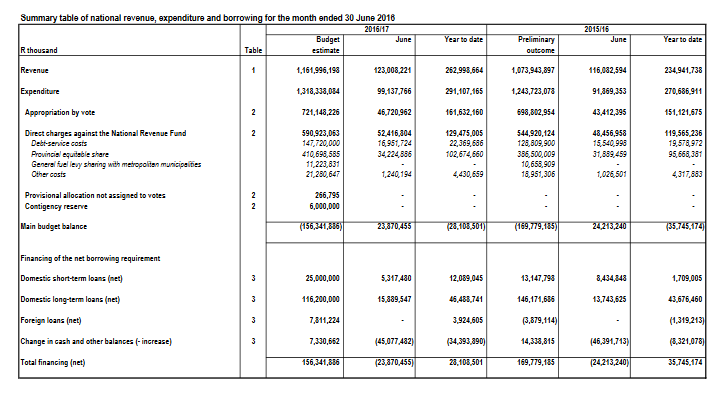 3) This is a summary of the Budget for 2016 as tabled by the Minister of Finance in Parliament in February for the year 2016. I don't want to be alarmist, but when you look up in the sky and see a comet hurtling towards you at 30 000 Kms/hour, like the fly hitting the car window, what is the last thing on your mind, besides your ass?

Let us consider these three numbers in contrast. SARS tell us we collected R256Bn in the first quarter. Let us assume that December seasonality taken into account, that a forecast of of total tax collected for 2017 will be R1,050 Bn, coming up R 100 Bn short of Treasury's Jun Estimate.

Now considering that Treasury is still saying in August, that last years expenditure of R 1,457 Bn will be reduced by R139 Bn to R 1,318 Bn. This will then go down in history as the first time that a Finance Minister has ever held back Government Spending. In the face of the latest election results, the executive is going to be under pressure from all its support-patronage relationships to rapidly deliver tribute. Lets say that we can expect them to come clean in Feb 2017 and admit to the same expenditure as 2016 (including the increased interest bill) Then they are likely underestimating the Deficit by R 139 Bn or R 289 Bn by their estimate.

Now adding the SARS shortfall of R 100 Bn , we could be looking at final count for the 2017 deficit of R 389 Bn – If not Armageddon, then at least Adamastor, a storm gathering above the Cape of Good Hope, a hideous phantom of unearthly pallor.