If you read my 2013 Budget review, “Going over the fiscal cliff” you will have noted me then screaming that the National debt had reached R 1 Trillion. Those were the good days. It now stands at R 2,2 Trillion. It is with absolute exasperation that I watch a beaming Pravin tell us that the good news is that South Africa still has a “credible borrowing capacity.” Bring on Brain Molefe because this fool is going to take us to the bottom. Giving the Guptas a new shebeen is a cheap price to pay to get some form of competence, anyone who will just say “no more”.

You look confused? Surely our finances are not dependent on Pravin Gordhan, surely the buck stops with the President or the whole Parliament itself? No The President is a clown, Miamane is a Clown, Malema is a clown, Manier is a clown. They are paid to be clowns - that is why they dance. They are priests, trade unionists and tenderpreneurs. Their job is to play to the crowd and see that their supporters get paid. They don't understand what the future is. The Minister of Finance has to be beyond that. He is there to protect us from them. When he starts to dance their tune we are truly broken. You are still going to have to read a financial table to understand my argument. Consider the table comparing the 2016 budget and the 2017 budget. Start with the 2017 revenue projection of R1440 Bn . Now we know we are in Zero growth (largely because Government has over the last 5 years completed crowed out private investment.) A tax revolt is already underway with this years 2016 revenues down R30Bn, Nevertheless our resident pharmacist pops a few pills and pencils in a 7% revenue growth. Throwing the last 50 years of economic theory to the wind, he ignores the Laffer curve and increases income tax rates (45%), fuel levy and dividends (20%). And he seriosuly wants us to believe that he will get it and get growth.

If he had ever run a business himself the Minister would know that an income tax increase is simply passed on. Workers demand higher net wages, these are met by reducing staff (rising unemployment) and reducing output (lower GDP and taxes) When you are at full taxation, you cannot increase tax collections by increasing the rate of tax. It is like trying to squeeze a tea bag for a second cup. You don't get tea you get tannin.

You will notice that while the rest of the economy stagnates, in Pravins cuckooland the Government sector advances spending by 8% and still “keeps debt at a stable 48%”. This is with no other purpose that containing the trough feeders. Already Government workers are paid more than Private sector workers, who have been laid off while Government employs. Don't be fooled by the argument “two thirds of our spend is on social services”. What they really mean is that two thirds of our spend is on the salaries of Government workers working in social services. 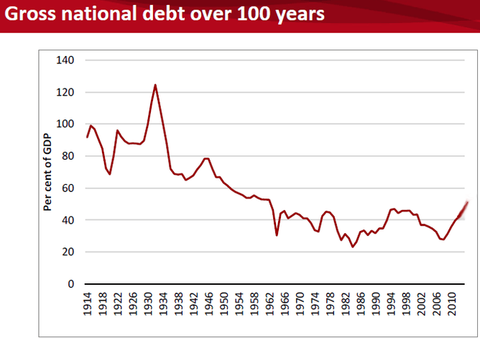 Essentially what The ANC, The DA and The EFF are saying is that we can eat cake while they crank up their vital services of Governing us. The fact that Defense and Public Safety gets the high increase of 9% is a telling portent of the violence that is to come.

We have been falling down the fiscal cliff for four years now. This is time to secure your life jacket, the boat is about to hit the bottom.