When this query first came up in the week following the ICTIndaba, Bouwer was quoted as saying that a full report would be produced in July. Well it is now July and for something as important as this there should be no reason (other than a desire not to disclose the figures) why this report should not have come out. Worse, while this matter remains unresolved, the ICTIndaba is trapped motionless like a deer in the lights. We lose hundred of millions monthly while we do nothing.

How can something like this happen? Errors like this happens when event managers take on a new task (neither Bouwer or Mnquibisa have every done a project of this nature before). One must also bring into question the Department of Communications for authorising a R 35 Million Rand expenditure without the correct pre event budget and project cash flow statement, and for allowing a situation to go on without interim milestone reporting. Typically in a project of this nature around 5% of the budget should be retained for accounting fees. If this is done and correctly executed then the opportunity for accounting error or fraudulent behaviour is minimised.

Particularly disturbing about the Sunday Times report is the paragraph, “Though the ICTIndaba, which was held in Cape Town, is believed to have raised more than R 50 Million in sponsorships and delegates fees, experts say that the cost of hosting such an event was likely to be less than half that.” The “experts” concerned are not named. But if taken to be factual this implies that someone has made off with R 25 Million which could have been used to bridge the digital divide.

A word from our sponsors – TurboCASH Accounting is ideal for project accounting. Its full budgeting facility, flexible chart of accounts and batch processing facility allow analysis down to transaction level if required.

Why is this important? It is not our money, this si just misappropriation of the telecoms sponsorships. Why not just give them the R25 Million and lets get on with it? MTN seems happy to stand back on its claim as it does not have the “competence” to implement an accounting system.

The reason Why solving this question is important, is that there is a lot more than R 25 Million at stake here. Whatever the motivations for all the parties to get involved, the ICT Indaba was a runaway success and has put us onto the first step to freeing Africa from the tyrannies of the neo collonial telecoms companies. By defining Internet Access as a human right and not as something that we will rent from international companies, we have taken the first step to breaking the chains that hold us down. 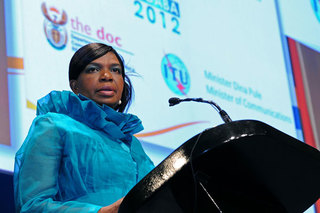 The problem that looms on the horison is that the aims and ambitions of the ICTIndaba are on a direct course of conflict with the profit interests of the private networks. There can be little doubt that what we require as Africans is strong leadership that will stare down the able bodied directors of the companies owning these networks and drive through our citizens rights to affordable access. South Africa as a leading ICT nation in Africa and as host of the ICT Indaba requires a Minister of Communications who is beholden to our citizens first, before our corporations.

Which brings us full circle to the question of the missing millions. If Bouwer and Mngqibisa made a fair profit from the ICTIndaba and this is fully accounted for, then what can be the problem? Everyone is a winner, except of course in the long run the telecom companies, who have unwittingly started to finance the thread that will ultimately unwind their control of the Internet. Who cares who the minister is romantically involved with? We can all get on with making good on the conference declaration.

However if Bouwer, Mngquibisa, and likely the romatically involved minister did construe an unholy deed and run off with millions, then clearly they are not the people to be leading the ICTIndaba forward.

There is only one positive way forward. Let us have the audit in public, in the open and all can see exactly what happened. We should regard with a great deal of suspicion anyone that attempts to mask or hide this disclosure. The solution where MTN and the other sponsors withdraw their requests for information, and withdraw back to their level of “competence” and leave these questions unanswered, serves simply to weaken the office of the minister and leave that office forever indebted to the very people that stand between Africa and our liberation. This would be untennable.