The Old Man has a way of talking to us, through data and not through prayer! And what the data is saying is that muslin countries could be doing better in the technology sector. Since Islam is my second favorite Abrahamist religion I feel compelled to help you. I hope you can read this in that spirit. 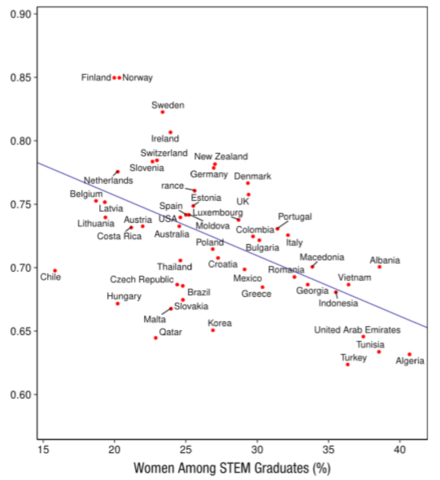 I have been perplexed by a recent study result that found that “Jordan, Qatar, and the United Arab Emirates were the only three countries in which boys are significantly less likely to feel comfortable working on math problems than girls are. “

It is not limited to these countries. The data shows that across a number of Arab countries the proportion of women STEM graduates is higher for women that other countries. This counter intuitive result has been perplexing me for weeks, especially when the neo liberal explanation of the science writer for The Atlantic Magazine fails to put out a coherent explanation. Why do women in countries ostensibly against gender equality, come out on top in science?

The explanation I propose is more plausible but likely to upset your Imam. You see, the thing about science is that it is primarily an atheist pursuit! There two key reasons for this. One, the more you start to understand the scientific frameworks for explaining the Universe, the less you see a need of a creative role for the Old Man. Two, science is not an ally of religion, but a competitor. Science actually offers a life style of thinking that is an alternative to a religious framework. Sure you do get Abrahamist that can span both models, but scratch them and underneath you will find pathological intellectual schizophrenics .

Back to the babes in the burkas. Why are they so successful? Maybe it is not they are super women but rather that their male counterparts are flunkies. In Muslim countries boys are given preference in religious studies and relatively, the best minds tend to follow religious or philosophical careers.

The explanation of the relative success of muslim females in STEM careers is not that they are oppressed, but actually that it is the boys that are oppressed! You are going to want to send the thought police in to investigate these women. If what I am hypothesizing is correct, it is precisely the second rate religious education that islamic women receive which makes them more prone to accept scientific ideas than their brothers. If I am right and the priests are wrong, then muslim countries will have a big job rearranging their societies to take advantage of the 4th Industrial Revolution or risk being left behind.

Christians and Jews don't like me either. I would welcome any other plausible explanation of this data that you might have.