An Accountants guide to The South African Budget

The minister opens his speech with the claim, " Today I want to leave you hopeful and outline how we will leave this economy in better shape for those who come after us."

The Ministers's claim is questionable when one sees the legacy of debt and unemployment that this budget will leave.

I have taken data from Minister Mbowenis Speech and prepared a draft set of management accounts. Here is a summary

Total consolidated spending amounts to R2 trillion each year over the medium term, the majority of which goes towards social services.

With this framework, we are on track to achieve our goal of closing the main budget primary deficit. We shall achieve a primary surplus on the main budget in 2024/25. This important achievement will coincide with the end of this sixth Parliament.

Most importantly, we will stabilize government debt at 88.9 percent of GDP in 2025/26 and the ratio will decline thereafter. This is a significant improvement to the framework we presented in October last year and creates a sound platform for sustainable growth.

Economic Outlook
In this context, the South African economy is expected to rebound by 3.3 percent this year, following a 7.2 percent contraction in 2020, and an average of 1.9 percent in the outer two years.

I have outlined a few of the reasons we have to be hopeful but also acknowledge that much work remains to be done.

With this statement, The Minister does not directly address unemployment in the Budget Speech.

I have therefore taken the opportunity to impose Figures from Stats SA onto The Ministers medium Term Forecast and I show that this budget is leading us to an employment bloodbath. (see calculations)

Tax Policy Changes
We must advise this House that we now expect to collect R1.21 trillion in taxes during 2020/21, which is about R213 billion less than our 2020 Budget expectations. This is the largest tax shortfall on record.

Summary of the Presentation on the Fiscal Strategy

This 2021 budget framework puts South Africa on course to achieve a primary surplus. By doing this, government debt will stabilize at 88.9 percent of GDP in 2025/26.

This would require a reduction of borrowing of 480Bn from 2024 to 2025 and would require the economy to grow organically by 10 percent in 2025 – this deduction is incoherent. This budget cannot be accepted as "putting us on course for a primary surplus." 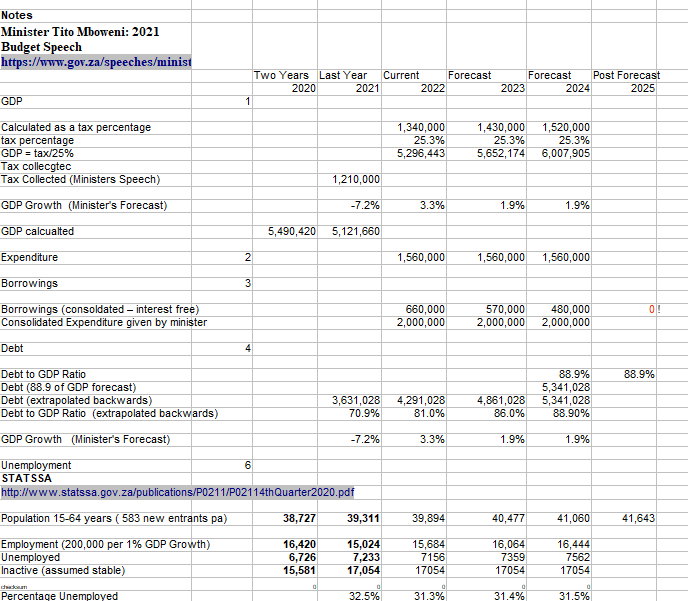 This budget will neither put us into a stable fiscal framework nor will it deal with our horrific unemployment problem. The outcome derived by treasury defies logic. And does not "affirm our commitment to sustainable public finances."

Whenever I comment on a budget, particularly if it is critical, I always suggest alternatives.

I have omitted to quibble about the line items of expenditure. I would exchange salaried government employees for increased grants.

The details of line expenditure are eclipsed in importance by the failure of the budget to implement structural changes. Here are proposals to correct, growth and debt.

VAT Reform. Scrap zero-rated items and make hundreds of thousands of SMEs immediately competitive in the supply of basic commodities Budget 2017 – I warn that the Deficit will blow to the highest level since before Apartheid.