“The cost of wealth is envy.”

Welcome to The Rollerball Economy. It is brutal for participants at any level. The squeamish should not get involved, rather take a seat with the unemployed and enjoy the watching the game. This is the hard-hit world of Modern Capitalism.

The Rollerball Economy is a dystopian description of the world economy in the early twenty first century, influenced by the Norman Jewison film Rollerball (1975). Dystopian scenarios are usually restricted to Science fiction, but as we approach 2018 (The setting year of the Rollerball Film), there are ominous signs that the real world is plunging inexorably into the dark scenario of The Rollerball Economy. 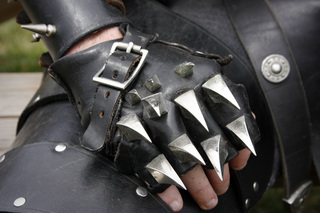 In the Rollerball Economy, the problem of production is solved and delivered by a few global corporations. Labor requirements are minimal and the vast majority of people live on a subsidy and are offered a media frenzy of Rollerball games as a means to fill their unproductive days. They buy the T shirts of their chosen team, sponsored by a corporation.

Income inequality and wealth inequality go hand in hand with Rollerball. The problem of inequality is well defined and has been copiously debated. In the US 1% of citizens account for 45% of the wealth. South Africa has the highest Gini Coefficient in the world for significant economies. In every measure, the gap between rich and poor is growing. The complex description of this is the Lorenz Curve. To keep it simple, think of people falling into three income or whealth groups. The 99%, the 1% and the 0.1%

What, you might ask is wrong with a highly efficient economy producing cheap goods for the 99% and astounding wealth for the 1%?

The cost of wealth is envy. As an example take two equals in an economy earning $1000 dollars each. Now let one earn $2000 and the other earn $10000. Even though they are both better off, the lesser feels envy and relative poverty. Even though they can both now afford a $1000 weekend holiday, the lesser feels envy that the richer travels first class. The Rollerball Economy is not a happy place. Even though your team is winning and you are being served beers and hamburgers at half time, something feels wrong and you can't help looking up at the corporates in the executive suites eating wine and crayfish. Illogical it may be, but inequality breeds resentment.

Describing inequality won't help. Neo liberalism is afire with the unjustness of global inequality. Squatting like a toad over the discussion is an imagined secret society of the rich, which has conspired to give each other high returns on capital and high returns on specialised labor. If this were the only true explanation of reality today, the spectre of The Rollerball Economy would be easy to avoid. However this is not the late nineteenth century, where monopolists were using collusion to keep prices and profits artificially inflated. This was easily stopped by the Sherman Act of 1890

This time The Sherman Act won't work and this renders Governments powerless. The Modern Capitalism is firstly global and not under the control of any single Government and secondly is itself subject to an exogenous production function driven by expanding technology. Production in the Kaldor style definition is a log-linear function of technology, capital and labor. The modern twist is that we have broken from any idea of a constant return of capital and labor. The surge in technology now means that products and even services benefit from volume and capital intensive efficiencies. The idea of an upward sloping supply curve is a figment of micro-economists' imagination, limited only to the fairytale setting of full employment.

In a scenario of rising efficiencies, global delivery systems prevail, because they have a commanding proposition. Given volume, global business will deliver higher quality goods at lower prices! It is not a conspiracy or collusion, but a technical fact of production output that is the root cause of inequality. While capital intensive global corporations are able to offer cheaper goods than local labor intensive companies, the terms will keep moving against labor and against the unemployed. This is the framework of The Rollerball Economy.

Labor is under pressure, because even while technology makes it marginally more productive it still becomes redundant with the relentless advance of capital accumulation. Worker productivity is less important than the quality of the machines and their operators. In particular, the 0.1% who are owners of capital, love those in the 1% that can retain and grow capital. It is not a conspiracy, but rather demand for these rare services that has driven the gap between CEO income and worker income to 200 to 1. Workers can easily be replaced or made redundant. CEOs cannot.

Here comes the rub. In similar economies inequality seems to offer greater aggregate benefits all along the Lorenz curve. In South Africa, the most unequal society in the world, the poor are richer than the average African. In the unequal USA, the poor Americans are richer than the poor of more equal Europe. Inside it is the relative poverty that makes the unequal state hard to bear. Outside people are not happy with less, no matter how it is distributed. They are striving to cross borders to get into the unequal economies. Striving to add more labor to an already over supplied market. And here through reductio ad absurdum, Capitalism rests its case for inequality. 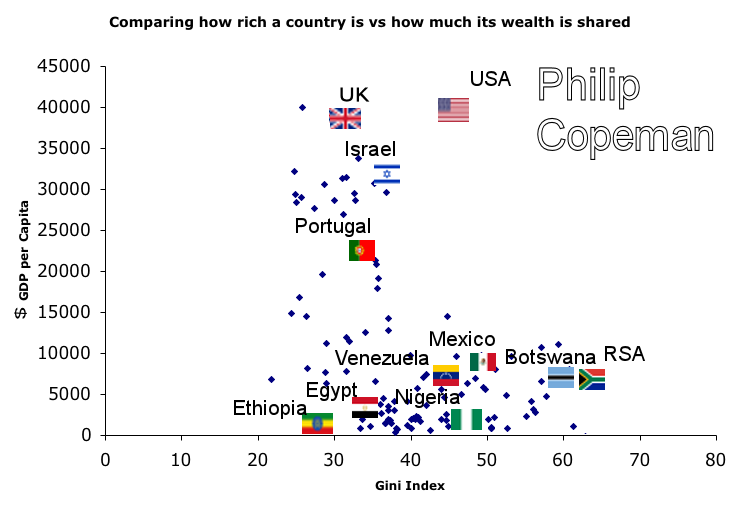 Can the slide to the Rollerball economy go on? Can inequality get worse? Sure it can. Currently 1% of Americans own 43% of US wealth. This percentage can keep growing simply by the 1% acquiring more capital and the 99% acquiring more debt. US Government structures run up debt (The Fed) and even the real structures implode (Detroit, California), but the global corporations keep getting stronger. This transfer keeps on until all wealth is depleted and completely in the hands of the 1%. Then the 1% trade with each other and out of the profits they toss the 99% a bone.

In South Africa where we run a current account deficit of the oder of $ 200 million per year and we run a Government deficit of $ 300 million per year, this debt gets bought by global corporations and a few individuals. The rest of the world still have a long way to catch up with the US and South Africa, but in both countries the corporations thrive. We are the counties with the most extreme Gini coefficients and we continue putting wealth into the hands of fewer. We are all powerless to stop it.

Welcome to the Rollerball Economy. Either get into the Game or buy a T shirt.